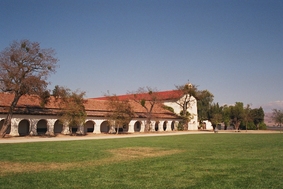 Your first day trip out of the park must be to see historic San Juan Bautista. Here you will find the oldest continuous in service Spanish Mission in California. While most other missions were closed and taken over by the state, Mission San Juan has remained an active Church with regularly scheduled services. The buildings surrounding the mission are part of the state run park that documents and preserves the historic significance of this community. Visit the many antique stores and restaurants in town.

Mission San Juan Bautista is the largest of the Spanish missions in California. The mission was used in the 1958 Hitchcock film Vertigo, but the bell-wall was treated as a "bell tower" staircase, actually constructed on a studio lot.