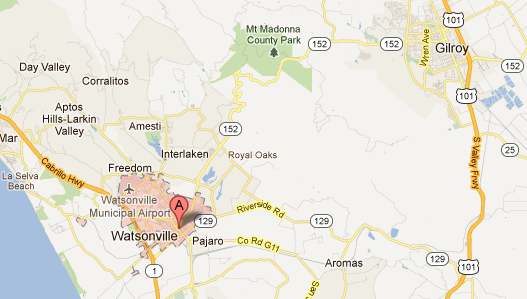 Watsonville's colorful history spans many thousands of years, having first been inhabited by the Costanoans, a hunter and gatherer Indian tribe. Remnants of their tribal campsites have been discovered on the Pajaro Dunes and along many coastal valley streambeds.
Explorers with the first Portola expedition in 1769 reported seeing a large straw-stuffed bird at one river's mouth and decided to name the river after the Indian symbol: Rio Del Pajaro, or River of the Bird.

Many European expeditions followed the first and by 1847, 40 people held claims to ranchlands where large herds of cattle grazed. Still, it wasn't until the 1848 gold rush in the Sierra Mountains that dramatic changes occurred. Land came cheap. The new settlers were the first to engage in large scale farming and ranching in the Monterey Bay Area.

Growth in the Pajaro Valley flourished as the Southern Pacific Railroad linked the area to the Santa Clara Valley in 1871. Churches, schools, newspapers, libraries and major businesses appeared as electricity and telegraph lines worked their way into the lives and traditions of the Pajaro Valley.

Today, agriculture and food processing remain the mainstay of the Pajaro Valley economic structure. Yet in keeping with recent trends, a new breadth of opportunity has opened for residents and businesses, including light industry, manufacturing, tourism and service oriented businesses.Watsonville is a rich agricultural community (the Pajaro Valley is one of the world's largest agricultural centers) famous for its strawberries , apples, and cut flowers, and for its ethnic diversity. Nearly 70 percent of the population in Watsonville is Latino. Watsonville ranks as the 21st largest Hispanic market in the United States. Watsonville is also a young town, with almost 34 percent of its population under 18 years of age.